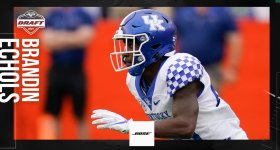 ​
The Kentucky Wildcats had a pair of defensive backs drafted to the NFL just two years ago. It would appear that history is about to repeat itself this spring. While the spotlight has focused on Kelvin Joseph, Brandin Echols is another Kentucky cornerback who should hear his name called in the 2021 NFL Draft.

Positives: Slightly undersized cornerback with terrific play speed and ball skills. Quick flipping his hips in transition, fluid pedaling in reverse, and stays with assignments. Keeps the action in front of him, stays on the receiver’s hip out of breaks, and displays a terrific move to the ball.

Effectively covers receivers on crossing patterns, tracks the pass in the air, and nicely times pass defenses. Reads the quarterback’s eyes, makes his move to the throw, and possesses good hands for the interception. Aggressive and fires up the field giving effort against the run.

Negatives: Possesses a thin build and gets overmatched by bigger receivers. Not a strong or stout corner.

Analysis: Echols is a well-rounded cornerback who plays disciplined football and played within the system at Kentucky. His thin build is a hindrance, but Echols has enough skill and ability to line up in dime packages at the next level.

Although the two Kentucky cornerbacks head to the 2021 NFL Draft together, Brandin Echols has traveled a markedly different path. Hailing from Southaven, Mississippi, he started his journey as a multi-sport star at Southaven High School. The athleticism that would eventually help him succeed on Saturdays began on the basketball court and the track. Echols was a state champion long jumper and earned All-State honors.

He transferred that versatility onto the football field. Lining up on both sides of the ball, Echols racked up 11 tackles, 2 sacks, and an interception as a senior. However, his love was on offense. At wide receiver and out of the backfield, he caught 29 passes for 406 receiving yards and 4 touchdowns while adding 906 yards and 8 touchdowns on the ground. Furthermore, he contributed 604 return yards and 4 touchdowns.

Despite the production his senior season, Echols did not earn any Division I offers. A combination of disappointing grades and a lack of recognition on the small Mississippi schools meant that Brandin Echols would have to take a different route to the NFL Draft.

Without a Division I offer, he enrolled at Northwest Mississippi CC. Although he went there intending to play receiver, fate would have other plans in store. Just two days before his first game, he was switched to the defensive side of the ball and lined up at cornerback.

He thrived as NWCC powered to an 8-2 record. Putting his skills as a receiver to good use, he snagged 6 interceptions, ranking second in the NJCAA. He also recorded 12 pass breakups, 49 tackles, and a forced fumble. Echols even contributed on special teams with a blocked field goal attempt. His performances earned him NJCAA second-team All-American honors.

This time, people were noticing his abilities. A three-star JUCO recruit per 247 Sports, Echols ranked as the 7th-best cornerback and 12th-best player in Mississippi. Local attention came from Ole Miss as well as offers from Houston and Kentucky. Describing the Wildcats as a “great opportunity,” Echols enrolled midway through 2018.

With Lonnie Johnson departed for the NFL Draft, there was an immediate opportunity for Brandin Echols to play. He earned his first start against Florida and went on to start 11 games at cornerback for Kentucky. Proving himself as an edge-setting cornerback, Echols racked up 52 tackles, 2 forced fumbles, 2.5 tackles for loss, and 1 sack. Moreover, he demonstrated disruptive playmaking skills by leading the team in pass breakups.

Following the success of his junior campaign, Echols started every game in his senior season. Once again, he flexed his tackling ability, racking up 54 tackles which were the fourth-highest on the team. Although his pass breakup numbers weren’t as flashy as his junior year, he secured his first career interception against NC State in the Gator Bowl.

Following the season, Kentucky cornerback Brandin Echols announced his intention to declare for the 2021 NFL Draft. After impressing through two seasons, he received invites to the Hula Bowl and Shrine Bowl.

Kentucky cornerback Brandin Echols can line up either outside or as a slot cornerback. His 5’11” height — if confirmed during testing — may lure teams into moving him inside. Either way, he will add a physical tackling presence to the secondary. Although he has two years of starting experience in the SEC, he will likely need time to develop if he is to be successful on Sundays.

Teams with a need at the cornerback position include the Dallas Cowboys, Cincinnati Bengals, Buffalo Bills, and New York Jets. With nearly every team playing five defensive backs in today’s NFL, there will be plenty of attention on the position. Brandin Echols should be coveted late in the 2021 NFL Draft.
Click to expand...