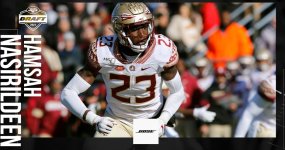 ​
By now, we know the 2021 NFL Draft safety class is a bit disorganized. There’s no consensus No. 1 player at the position, and there’s also the nuance of versatility to account for. Some NFL Draft prospects, like Florida State Seminoles safety Hamsah Nasirildeen, project better as multifaceted chess pieces than pure coverage or box players. Let’s dive into Nasirildeen’s 2021 NFL Draft profile and pinpoint how exactly he might flourish at the NFL level.

Positives: Tough safety with nice size who is best playing in the box and between the numbers. Explosive run defender who squares into tackles and easily brings opponents down at the point of attack. Quick to read and diagnose, stays with assignments, and displays a good head for the ball. Works well with cornerbacks to bracket receivers in the middle of the field.

Analysis: Nasirildeen was a consistent defender for Florida State when healthy, but he comes with limitations at the next level. He’s a traditional run-defending strong safety who may be able to add 10 pounds to his frame and move to linebacker.

If you want to talk about chess pieces, that’s exactly what Hamsah Nasirildeen was in high school. Originally listed as an athlete from Concord, North Carolina, Nasirildeen played as many as four positions, lining up at wide receiver, tight end, linebacker, and safety. It’s no surprise that Nasirildeen was one of the more popular players in the 2017 class.

By his senior season, Nasirildeen was a four-star prospect and the 192nd-ranked prospect in the nation. He had offers from Alabama, Clemson, Florida, Georgia, Notre Dame, and Penn State. Nasirildeen was drawn to Florida State’s legacy of defensive development, and he also capitalized on the chance to play with a similarly-built safety named Derwin James.

The Florida State Seminoles wasted no time getting Nasirildeen onto the field. Surrounded by talent, Nasirildeen still managed to play in all 13 games in his true freshman season. The Florida State safety logged 29 total tackles and three pass deflections in a reserve role. He also showed out against the defending champion Clemson Tigers, logging ten tackles in that affair.

In 2018, Nasirildeen again played in every single game for the Seminoles. Nasirildeen accumulated 91 total tackles, one interception, and two pass deflections in an increased role on defense. He was named the Most Improved Player for Florida State, but his improvement in 2018 paled in comparison to the breakout he’d experience the following year.

2019 was the year that Nasirildeen truly neared his potential on the college football stage. The Florida State safety became one of the premier defenders in the league as a true junior, amassing 101 total tackles, a sack, two interceptions, three pass deflections, and three forced fumbles. Nasirildeen earned second-team All-ACC honors for his standout season. He likely would have been named on several 2020 watch lists had it not been for his devastating injury.

In the last regular-season game of 2019, Nasirildeen tore his ACL when attempting to adjust for a tackle. The injury sidelined him well into the following season, but Nasirildeen managed to return in November, for two games against NC State and Duke. Nasirildeen managed to accrue 13 total tackles, an interception, and a pass deflection in those games. In a reassuring turn of events, he displayed shades of his previous playmaking ability. But he still has more to prove ahead of the 2021 NFL Draft.

Hamsah Nasirildeen is a fun evaluation. Of course, when he’s a 6-foot-3, 215-pound safety, would you expect anything else?

There are some withstanding concerns with Nasirildeen, as we’ll get into later on. But first, let’s take a look at the appeal of his profile and how he might find success at the NFL level. Above everything else, Nasirildeen is an exciting athletic talent. He doesn’t have high-end speed, but he’s fairly explosive in short ranges. He’s also fairly smooth and fluid when changing directions and moving through traffic, although he does experience stiffness with more abrupt direction changes.

Nasirildeen’s fluidity as an athlete shows up most often in run defense. The Florida State safety naturally swims through congestion, and when he has an angle on the ball carrier, he has the stored potential energy to accelerate into his tackles. Nasirildeen’s size also helps him in this phase. He’s a little slim for his height, but he has a compact build that stops runners in their tracks. His length also allows him to contest blocks and wrap up ball carriers in pursuit.

Nasirildeen’s instincts also pleasantly surprise in run defense. The Florida State safety rarely gets fixated on direct angles and knows when to adapt his speed and pursuit trajectory. He’s also good at disengaging blocks in a timely manner and wrapping up running backs before they get past him. Additionally, Nasirildeen is a premium tackler. His explosiveness enables him to get downfield quickly, and in one-on-one situations, he can adequately square up players with his imposing frame.

I would say Nasirildeen is more consistent as a run defender, but his physical dimensions dictate that he has immense upside in pass coverage.

Nasirildeen flashes range downfield, which derives from his short-area burst and length. When Nasirildeen adequately sticks with his man, he has the ability to reach a second gear as the ball approaches. His closing speed is awe-inspiring, and with his length, he can capitalize on it effectively. However, he isn’t always in position to use those traits for a couple of reasons.

The Florida State safety is fairly patient in zone coverage, but this patience can sometimes extend to indecisiveness and late reaction. Given Nasirildeen’s lack of top-end speed, he doesn’t have much room for error in reaction times. He’ll have to learn how to better trust his keys at the NFL level and make faster decisions. That way, he can maximize his explosiveness and disruption potential at the catch point.

There’s definite room for polish with Hamsah Nasirildeen. Among other things previously listed, his foot speed can be better, especially when lining up in the slot. Moreover, his urgency sometimes lacks consistency. At his best, his pace of play mitigates concerns surrounding his speed. But he needs to bring that aggressiveness and decisiveness on every play. Otherwise, his inconsistencies might erode his physical potential.

Nonetheless, Nasirildeen is an exciting prospect, and the appeal comes with his upside and versatility. Nasirildeen is smooth, instinctive, physical, and rangy. We can nitpick details of his game, but for teams in search of a defensive chess piece, Nasirildeen is a solid investment to make. Ideally, with further development and role definition at the NFL level, he can take the next step and realize his full potential.

With all this being said, there is one more important note regarding Nasirildeen. In 2019, against the Florida Gators, the Florida State safety tore his ACL in a non-contact incident. He didn’t return until almost a year later, and he only managed to play three-quarters of the 2020 season. Nasirildeen managed to produce in that limited action and flashed his original athletic traits. But the Florida State safety will have to prove he’s back to 100%. He looked good at times in Mobile, but he didn’t provide full testing numbers, so there remains uncertainty.

In the right role, Nasirildeen can be an impact defender. And given the relative scarcity of talent in the safety class, teams could bet on Nasirildeen if his medicals check out. Nasirildeen could go anywhere from Round 2 to early Day 3. Even if his speed doesn’t wow people, certain teams will like his versatility and instincts. As long as they like his explosiveness on tape, he’ll have security on the draft board.

As mentioned earlier, Nasirildeen will have to go to a team that can use his talents correctly. Nasirildeen shouldn’t line up at safety every snap — not when he has the aptitude to play deep, at linebacker, or in the slot as a big nickel.

Teams like the Buffalo Bills, Cleveland Browns, and New York Jets have the mix of need and schematic flexibility that could help Nasirildeen produce early, but other teams might be inclined to acquire his skill set as well.

For now, the medical note is the one big thing holding Nasirildeen back from being a Day 2 lock. Had he played a full 2020 season, he likely would have continued to produce. In that scenario, he also would’ve had a chance to refine his game further. The ACL injury set Nasirildeen back a bit, but he was able to take steps in the right direction at the Senior Bowl. Thus, he may have earned some confidence in April.
Click to expand...